Afghan Drugs Are Sold All Over The World | Will The Taliban Risk Abandoning This Lucrative Business? Afghanistan is called the “cemetery of empires” – in the entire history of the country, not a single world power has managed to establish its rule here. Afghan drugs are sold all over the world.

The secret of success is the desperate resistance of the locals. Over the past decades, the world has learned that Afghans are successful not only in guerrilla warfare but also in the production and processing of opium poppy.

Afghan Drugs Are Sold All Over The World

Almost all heroin on the international drug market comes from Afghanistan. Until recently, the Taliban movement (a terrorist organization banned in Russia ) controlled and developed drug production, and now the Taliban declare that they are ready to curtail this profitable business. What is behind these claims? Is the new Afghan government ready to close such an important source of income for itself?

We understood what role the Taliban play in the global heroin industry, how opium became the main agricultural crop in Afghanistan, and why the United States has not been able to defeat the local drug business in 20 years.

The word “heroin” is the trade name for diacetylmorphine, which the German firm Bayer produced as a cough medicine at the end of the 19th century. The side effect of the drug was such a strong euphoria that it was dubbed a “heroic substance.” But apart from the name, there is nothing heroic in it: this is one of the most terrible drugs known to mankind.

The opium poppy fields, a key raw material for drug production, are located mainly in the southern part of the country, in the provinces where Taliban fighters have had the greatest influence. Under their protection, the industry flourished.

In a record-breaking 2017, the total turnover of the Afghan heroin business was estimated by the UN at $ 6.6 billion. Then, as experts calculated, 400 thousand people were involved in the production and processing of opium – more than in the entire government army of the Islamic Republic of Afghanistan. According to the UN for 2018, the drug trade accounted for up to 11 percent of the country’s GDP.

In August 2021, the Taliban, who seized power in the country, unexpectedly announced an ambitious goal: to end the heroin industry.

We assure our fellow citizens, men and women, and the international community that we will not allow the production of drugs. From now on, no one will be involved in the heroin trade.

Zabihullah Mujahidofficial representative of the unrecognized Islamic Emirate of Afghanistan.
The international community does not trust the Taliban on this issue, just as it does not believe the words of jihadists about women’s rights and freedom of speech. All the previous years, the Taliban defended the drug business for a reason: they controlled and taxed it, and heroin profits played a role in their military success.

In August 2021, Pashtun militants in traditional dress and with black-eyed rims – this is the local custom – entered one major city in Afghanistan after another, often without encountering any resistance. The American-trained Republican military fled, abandoning weapons and armored vehicles, or even surrendered to the Taliban. The jihad did without a big massacre – the only exception was the execution of captured soldiers.

For the sake of such a relatively bloodless conquest, the Taliban have done a great job with local authorities: since it became known in the spring of 2021 about the impending withdrawal of US troops, the Taliban have come to negotiations with mayors and made deals.

On paper, they looked like a non-aggression pact, but in fact, the governors agreed to supply the terrorists with weapons and withdraw troops when the time came. In exchange, the Taliban guaranteed them immunity and, of course, large monetary compensation. 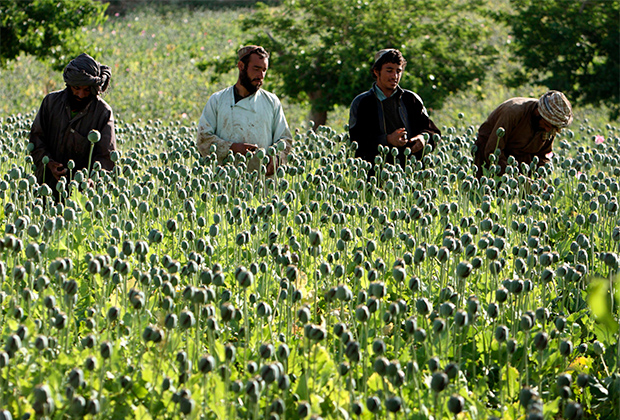 Where did the Taliban, leading a guerrilla lifestyle, get the money to bribe officials and buy weapons? They are known to tax trade and transport routes in all territories that control and also conduct unlicensed mining of minerals, which Afghanistan is rich in. But the technologies available to them hardly guarantee high profits from the sale of resources, and levies from the practically impoverished population of Afghanistan are also not very profitable businesses.

According to some British experts, most of the militants still make money on taxes on legal goods: fuel, tobacco, and other resources. But according to John Sopko, the US special inspector for Afghanistan, up to 60 percent of the Taliban’s income comes from the heroin trade.

The militants’ net profit from the drug business is annual, according to the UN

Like almost any production of illegal psychoactive substances, the cultivation of fields with opium poppy provides super-profits that are not found in any other area. Afghan peasants, however, receive only about a quarter of the proceeds. A significant part of it goes to smugglers who bring drugs to Europe: if to Russia – then through the countries of Central Asia, if to the West – then almost always through Turkey and the Balkan countries, just those that now, during the crisis, warmly welcome Afghan refugees …

For many years, men with machine guns and long beards have taken their considerable share. The Taliban are not the first to take up this business, before them the mujahideen who fought with the Soviet Union were engaged in it. “We must grow and sell opium — all for our holy war,” one jihadist leader told The New York Times in 1986.

Terrorists who received weapons from the United States collected huge taxes from the owners of poppy fields and did not accept refusals: those who did not want to grow opium poppy were threatened with castration or the death penalty.

After American troops appeared in the country and the Taliban became the main group controlling the poppy fields, production volumes increased significantly. In the mid-1990s, about 50 thousand hectares of opium plantations were cultivated in Afghanistan. Ten years later, in 2005, the area doubled, to more than 100 thousand hectares, and eight years later, by 2013, doubled again.

The drug business has become a very significant part of the Afghan economy. There is much more heroin in the country – and now not all drugs reach the borders. In 2005, there were about 200 thousand opium and heroin addicts in the country, in 2009 their number reached a million, and in 2015 the UN counted approximately 1.9-2.4 million drug-addicted Afghans.

Drug addicts who have fallen out of their normal way of life gather in secluded but well-known places: one of these locations is under the Pul-i-Sukhta bridge in Kabul. Several thousand people are constantly there, using drugs among heaps of rubbish and rags. The heroin epidemic has affected both women – they use the substance as a pain reliever, and children – they follow the example of drug-addicted parents.

The country lacks qualified drug addicts and social protection mechanisms, so the Taliban create a kind of “rehabilitation program”. They take drug-addicted men into their ranks: they spend time in remote mountainous areas, where militants who are versed in Islamic theology work with them. After several weeks of preaching and sobriety, they can return to normal life. But about one in two chooses to join the Taliban and embark on the path of jihad.

Obviously, the Taliban cannot protect the entire Afghan population from drug addiction – and they are unlikely to set such a goal. Despite the obvious harm that the industry does not only to foreigners but also to locals, not only those who cannot stand a day without a dose are opposed to the fight against drugs.

The United States has spent enormous amounts of energy and money in the fight against the opium economy. Official sources say the figure is $ 8 billion. But no effort – neither the destruction of the landings, nor the raids, nor the bombing of key points – did not allow the Americans to achieve their goal.

All our efforts have yielded no meaningful results

Moreover, it fueled additional hostility towards the official Kabul and its foreign allies. Farmers, whose entire well-being is based on superprofits of opium, from attempts to harm their production only began to better relate to the Taliban.

Collusion, fear of the Taliban, and corruption: why did the Afghan army surrender the country without a fight?

In connection with the new promises of the Taliban to end the industry, people now remember 2001 – an important milestone in Afghan heroin production. In 2000-2001, the militants tried to curtail production for the first time. Then they introduced a ban on the cultivation of opium for export and sharply reduced the area under crops – more than tenfold: from 82 to 8 thousand hectares.

However, the US Drug Enforcement Agency (DEA) points out that the move can hardly be considered a gesture of goodwill. This happened in the months after the September 11 attack: the terrorists were waiting for the American invasion. Against the background of this danger, which at that moment seemed much more serious, they decided to sharply raise the prices of the drug. As crops plummeted, the price jumped to a record high: a kilogram of opium, which was sold in the region for about $ 95, went to $ 746. At the same time, the main stocks of raw materials were still controlled by the Taliban – it is assumed that at that moment they earned themselves a “financial cushion”.

Wanda Felbab-Brown, of the Brookings Institution, think tank, pointed out that at the time, the Taliban caused widespread anger among opium farmers and risked their influence in the regions under its control.

When it became clear that the American invasion would not destroy established production, crops quickly grew to their previous size: already in 2002, poppy fields occupied 74 thousand hectares, and in 2004 they surpassed those that were before the arrival of the Americans – and continued to grow. The ongoing hostilities in the country exacerbated the economic crisis, the population became poorer and more and more in need of money, poppy fields grew more and more.

“We stood on the sidelines and allowed the Taliban to become arguably the largest funded terrorist organization. (…) The United States and its partners withdrew troops and did not fight the production of opium – and now it will show explosive growth, ” an anonymous source in the American administration told Reuters.

The affair is not limited to heroin: Afghanistan has long been a supplier of hashish, and in recent years Afghans have begun cultivating ephedra, a plant used in the production of methamphetamine, an almost equally dangerous drug.

Foreign subsidies for opium plantations are cited as a guaranteed effective measure that can stop production: the Taliban expect Turkey, Iran, Russia, and other states to compensate tens of thousands of Afghan peasants for losses if instead of opium poppy they grow, for example, wheat.

Contrary to their wishes, the opposite process is observed: the countries, on whose financial infusions the Afghan economy depended, are in no hurry to cooperate with the Taliban and have frozen funding. 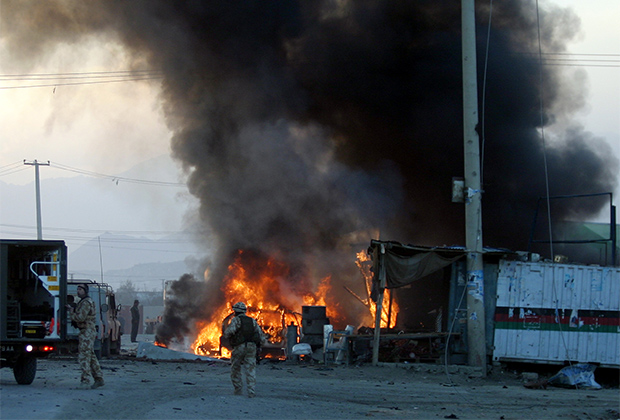 Consequences of the terrorist attack in Kabul in 2005

The ability of the Taliban to maintain order in the country also raises doubts: against the background of the terrorist attacks with dozens of victims that took place in Kabul on August 26, the militants’ power looks fragile.

The chaos that would arise if the Taliban did not hold on to power would exacerbate the country’s economic crisis. This means that the need for income from drugs will also increase, and the Afghan drug traffic will not be interrupted, but, on the contrary, will become stronger.